The History of ROAR: An Intricate Evolution

ROAR has its roots in an idea that emerged in the summer of 2017. Terry Hermsen, professor of English at Otterbein University, contacted a number of faculty at small colleges around central Ohio: Otterbein, Denison, Ohio Wesleyan (OWU), the Ohio State University-Marion, and the Methodist Theological School of Ohio (MTSO) to look toward ways our colleges might build collective action to address the climate crisis via cooperating with our respect small-size cities. Our model being the Oberlin Plan, we adopted the name of the Central Ohio Communities Project (COCP) and built communication over the coming fall toward a gathering at Stratford Ecological Center, on January 24th, 2018. We reached out to David Orr himself, who founded the Oberlin Project—who agreed to be our keynote speaker for that initial event and thus what has evolved into ROAR began.

Our gathering that Saturday was so very beautiful. Faculty from both Otterbein and OWU cooperated in planning the activities and speakers. In addition to David Orr, we heard from Jeremy King, the Sustainability Director at Denison; Jim Reding, a high school teacher in Granville, who brought seven of his environmental studies students to present their community garden; Trish Demeter, Director of Energy at the Ohio Environmental Council; and Tim Van Meter, who highlighted the work in local food aggregation being fostered by Seminary Hill Farm at MTSO. We had attendees from many of the crucial environmental efforts in central Ohio: the sustainability coordinator from the Columbus Zoo, the director of Dawes Arboretum, the Environmental Professionals Director from OSU, education director from OEFFA, the head of the Electric Division for the city of Westerville and the Sustainability/Watershed Coordinator for the City of Delaware. We held World Café sessions, formed the beginning of working task forces, and pledged to continue our efforts into the following year. All 110 of the participants, packed into the Stratford Ecological Center, left enthralled as they walked out into the snow at the close of that inspiring day. 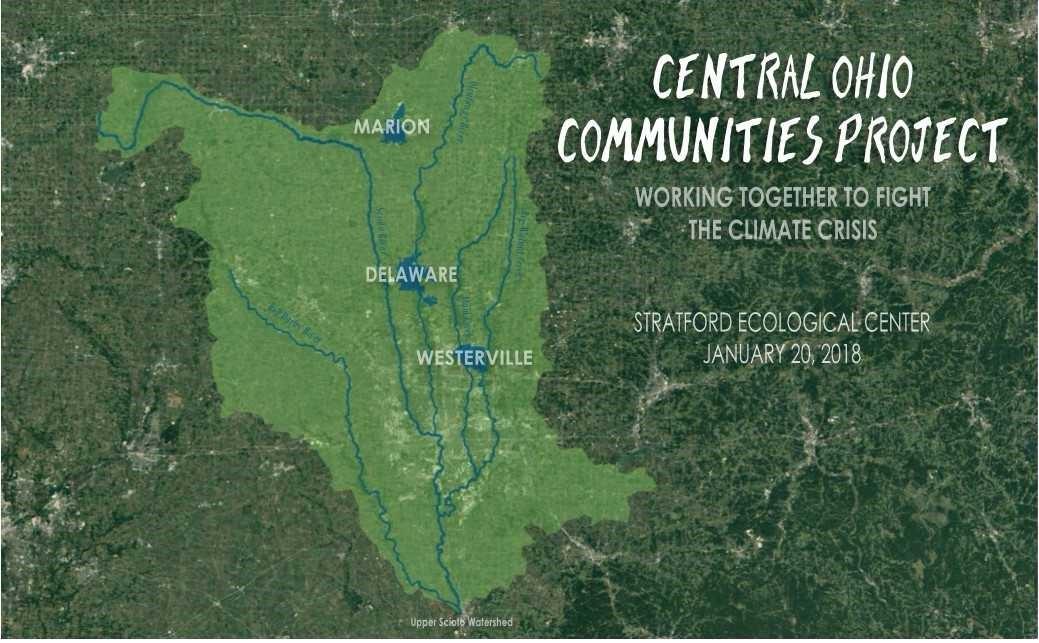 It was beautiful… and then, very little happened. The task forces, being just formed that day, proved to be too ad-hoc and temporary. The only one that lasted was the Natural Areas Solutions group, which has continued to meet over the next two years and has shaped a wonderful website presentation that will be very useful for landowners—from schools to churches to individuals—for transforming their properties to create carbon sinks, such as wetlands, prairies, tree canopies, etc. But our hope was that all break-out sessions would result in such on-going efforts. We failed, however, to put in place the structure for such wide-ranging coordination to truly build into a vibrant, cross-area organization.

This meant the efforts of the Central Ohio Communities Project had to shift gears. We spent much of 2018-19 focusing on one community in our midst, the city of Delaware. Taking our cue from the internationally successful Transition Town movement, we held seven events in the city of Delaware, hoping to build a greater set of grassroots volunteers. These events consisted of:

All those efforts, focused on Delaware, were a microcosm for what we’d like to make happen in the central Ohio as a whole, which is where our original goals lay. We felt that if we could get some success in one community, we’d be in a better state to take our effort regional. And that is where our third stage—if you will—has brought us. For even while our efforts in Delaware were unfolding, in the spring of 2019, we began reaching out to other stakeholders in Columbus, Licking County, Ohio Environmental Council, etc., to develop a what we at first called a “Regional Hub for Climate Change Action, Energy Transformation and Small Town Resurgence”.

In the beginning, our gatherings we small. A group of 8-10 folks met for an hour after an EPN breakfast in January of 2018, kicking around the idea of Regional Hub of this kind. Chuck Lynd from Simply Living attended, along with Jason Cervenec from the Byrd Polar Center; Cathy Cowan Becker from the Sierra Club’s Ohio Chapter attended, along with David Celebrezze from the Columbus Sustainability Office, along with several others. We followed that up with a similarly small gathering after a Sustainability Summit at OSU in February—and decided at that time that there was enough interest to begin meeting regularly. A group of 6-9 planners began conferring via Zoom bi-weekly for the next two months, resulting in holding a Working Summit at Ohio Wesleyan University on June 26, 2019. We had over 65 attendees, from all over central Ohio, and met in small groups to begin shaping what the Hub might become.

The notes from our June 26 meeting were then shaped into the beginnings of the vision you now hold in your hands. A vision that began over two years ago—and is now ready to be launched over the next six months. It’s taken much longer than any of us at first imagined, but the idea has blossomed in exciting ways that has drawn in more stakeholders and more secure plans for action.

Our history over the past two- and-a half years leads us to the conclusion that there is a deep need in the central Ohio area for a coordinated action plan uniting the various stakeholders and initiatives already underway. We drew people to the original Working Summit with David Orr because of that “felt need” among so many of the people who attended. And the same can be said for our productive gatherings in Delaware over the next year, as well as our “Envisioning a Regional Hub” gathering at OWU in June of 2019. People came because they supported the idea of uniting our efforts. On the worksheets from the day, they over and over made comments such as the following, in answer to what function such the Hub would serve:

The authors of these insights include a wide range of experts themselves: Brooke White, Air Quality Specialist for MORPC; Geoff Dipre, one of the key developers of the Byrd Polar Center’s Climate Adaptation Plan for Columbus; Alana Schockey, Sustainability Director for the City of Columbus; Randi Leppla, Energy Attorney for the Ohio Environmental Council; Paul Eisenstein, Academic Dean for Otterbein University; along with others. Their comments—from which this list is a mere sampling–indicate the great need that people in that room—and beyond—have long seen as a weakness amongst all the great efforts happening in our area. In order to be as effective as possible, a region as large and diverse as ours needs a means of linking what needs to happen to build truly sustainable practices. The eight-county area around Cincinnati (which includes northern Kentucky and southeastern Indiana) has Green Umbrella to look toward for such coordination; the counties surrounding Athens in the southeastern part of the state looks toward Rural Action for that same function. Those of us committed to making this Hub work effectively see it as a fulfilling that same deep need in the counties surround Columbus.